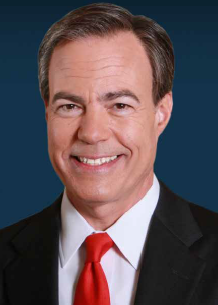 Joseph “Joe” Straus III graduated in 1978 from Alamo Heights High School, where he served as Sophomore Class Parliamentarian and Senior Class President. As a student council representative, Joe sat on the Advisory President’s Council, and was a staffer of the school newspaper, the Hoof Print. Joe was involved in the Spanish Club Los Amigos, the Key Club, and spirit clubs such as the Mule Skinners and Hitops. He also played on the Varsity Football Team and Varsity Golf Team, all while maintaining academic success and community involvement.

Joe Straus was first elected to the Texas House as the State Representative from northeastern Bexar County in 2005. At the outset of his third term in the House, his colleagues voted unanimously to elevate Representative Straus to the position of Speaker, and he was overwhelmingly re-elected as Speaker four times in the years that followed. Serving 10 years in the role, he was the first Speaker of the House from San Antonio in a century, and has been widely praised for his focus on the core responsibilities of government and his constructive governing style with priorities that include: strong public schools, outstanding colleges and universities, a reliable water supply, a modern transportation system, and policies that embrace the diversity and respect the dignity of all who want to work and invest in Texas. Speaker Straus has also been a champion for improving the state’s behavioral health care system and investing more dollars in child protection.

Joe has been a long-time advocate for public school education and served as Co-Chair of the Early Education Steering Committee for the Pre-K SA Program, and Co-Chairman of Early Matters San Antonio, an organization that is working to rally the local business and civic community around the importance of high-quality early childhood education for all children. He is a member of the Honorary Board of Directors at the SMU John Goodwin Tower Center for Political Studies, and serves on the Texas Biomedical Research Institute Board of Trustees. His current role as the Chairman of Texas Forever Forward allows him to continue promoting “sensible, thoughtful leadership for Texas.” In 2017, Joe was named Texan of the Year by Dallas Morning News for his leadership in the fight against divisive social legislation that threatened Texas’s business climate.